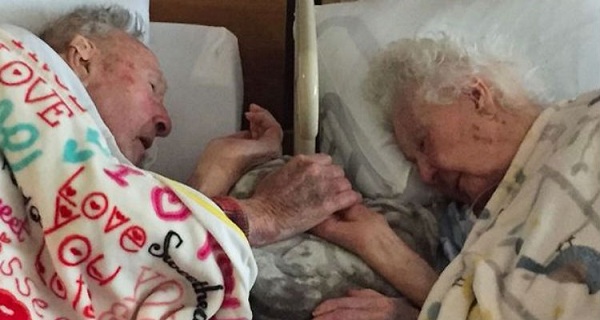 Recently, one couple showed everyone what the marriage vow, “Til death do us part” really means. In the heartbreaking photo shared by a granddaughter on Reddit, her 100-year-old grandfather and 96-year-old grandma hold hands as death tears them apart after 77-years of marriage. The viral picture has touched the hearts of millions as they continue to spread the image across the internet sharing it with their families and friends on Facebook and Pinterest… The image, which came from Reddit user RealLiveGirl from California wrote: “My Grandma, 96, with my Grandpa, 100, hours before her death this weekend. 77 years of marriage.” In the picture, the elderly couple hold hands as they lie in hospital beds adjacent to each other. After the picture went viral, the Reddit user added: “I know they are my grandparents. But this picture is seriously the saddest and cutest thing I’ve ever seen.” Thousands of other social media users agreed. The picture was liked more than 5000 times and generated nearly 1500 comments to date. “Sorry for your loss,” Reddit user CramPacked wrote in the comments. “But what a ‘great’ way to go. Holding hands with your spouse, in a warm bed, presumably with loved ones around. Sympathy to your Grandfather who lost his lifelong wife. God bless all around.” Other people shared similar stories from their family in the thread. “This hit deep for me. My grandparents raised me and continue to allow me to live with them,” user hammer shared. They’re both 74, 5 hours apart in birth, and have been together since 16. My grandfather’s mortality has been really hitting him mentally lately. Me leaving for college next weekend is going to feel conflicting for the first little while I think. I would be on the street without them. Sending love and care to you, your grandfather, and your family OP this is a memorable photo.” In response to that comment, losmescaleros wrote: “I don’t know how to say this, but I feel like I have to. I was in a similar situation to yours. While I didn’t understand it until after, I lost my grandpa two years ago, and in so doing, I lost my greatest supporter and best friend. I just want to say, God bless you, your grandpa, and your grandma. May you all understand what you mean to one another and live happily and healthily.” Everyone who came upon the picture had something kind and wise to say: “This image is what it truly means to grow old together.” Surprisingly, the granddaughter has written back that she has received a lot of hate mail for sharing the image. It’s unclear why someone would have something bad to say about the image but she wrote later: “Thank you. This note made much of the ‘hate’ I’ve received worth it.”

This Is What You Need To Check When You Buy Bottled Water
14 Symptoms That Indicate High Blood Sugar Levels!
To Top