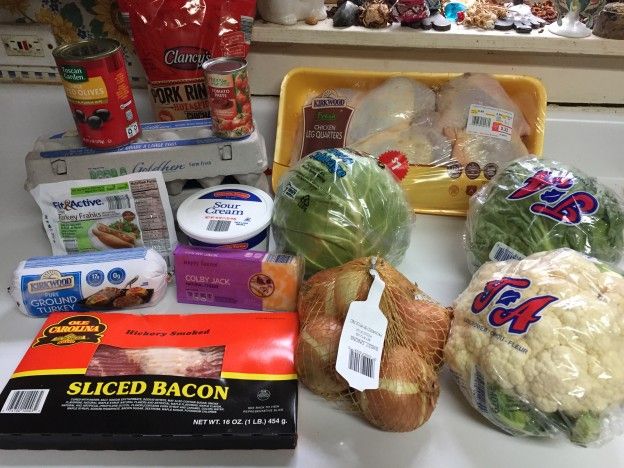 Just pretend you’re broke, or maybe you really are. You paid all your bills this week and you’re left with $50. Don’t worry we have a solution for your problem.

Namely, this is a menu for one. It includes three meals a day for a week, so that you eat half for dinner and save the other half for lunch the following day. In addition, the recipes could be doubled, or be shared as just dinners with another person. You also need access to a dollar tree that sells cooler or frozen foods, the greater the selection, the better. Moreover, these items are sold in the Dollar Tree stores around Birmingham, but of course, they also sell similar items in other places.

It is not actually a Paleo, organic, or gourmet menu. It is a fact that there may even be some gluten in there somewhere as there are processed meats. Remember, it’s a menu created to get someone through a week on a $25 budget.

The best thing is that these recipes are simple, easy to cook, as well as taste good.

Furthermore, you can make all of these on Sunday if you want, and package them for the week.

In addition, my grocery purchases were the following:

– One bag of pork rinds

– One bag of frozen spinach

– One bag of frozen peppers and onions

– One package of frozen tilapia filets

– One chub of frozen breakfast sausage

– Two 3 oz packages of shredded mozzarella (choose real cheese, not the fake one)

– 3 half dozen cartons of eggs

– One three pack of string cheese

– A jar of pickles

– A package of walnuts

– A bottle of real mayonnaise

– A can of black olives

– A can of mackerel

– A bag of shelled sunflower seeds

– A package of pepperoni slices

– A shaker of parmesan (a smaller one, as the big can is actually a cheese product)

A six pack of eggs, a sausage, and a cup of the frozen pepper mix.

Firstly, brown the sausage and scramble the eggs with the peppers, stir it all together and put it in a bowl. Just dip some out every morning and heat it up for breakfast. It is quite easy.

Next up: Tuna salad

Take 3 tablespoons of mayo, the package of walnuts, some cut up pickles, salt and pepper and tuna. Then, boil 2 eggs.

Cook about two cups of your veggie mix, put 1 egg, half the tuna, and half the veggies for dinner, and pack the other half for the next day.

Start by thawing the whole spinach package, put it in a mixing bowl with 1/4 cup of parmesan and 1/4 cup of mayo and some salt and pepper. Place it in a small baking dish and crack 4 eggs on the top. Don’t forget to salt and pepper the eggs, put in the oven, and bake it for about 20 minutes. Of course, you could shorten the baking time to 10-12 minutes if want a runny yolk. You can serve half per meal for two separate meals. Also, you could have some sunflower seeds as a snack.

Most probably, there will be two small tilapia fillets in the fish package. You should cook them in a skillet and set them aside. You can add to it some bacon fat or a little butter if you have that, as well as some salt and pepper. Plus, dump half the bag of stir fry mix, minus about a half cup, into the pan and cook it until the veggies are soft. At least, just split it between two dishes, add a string cheese for a some extra protein and fat, and enjoy your meal.

First of all, take the pepperoni and put one in each well of a twelve cup muffin tin. Afterwards, add a tablespoon of the Rinaldi pizza sauce to the top of each one. In case there are extra pepperonis, chop them up and add a few to each up. What’s more, slice several olives and add to each cup, get that bag of frozen pepper mix and add a few bits of chopped pepper and onion from it. Also, put a little parmesan on them and top with the shredded mozzarella and bake for about 15 minutes, until they look right. You can also make a cup of frozen veggies.

Just open the fish, drain the liquid and empty the fish into a large bowl. Next, you should add the bag of shredded cheddar, about 1/3 cup of mayo, two eggs, crush enough pork rinds finely to equal half a cup of crumbs, as well as salt and pepper to taste. Combine them all together and shape the mix into three or four patties and cook them in a skillet until they have a nice crust on one side. After that, flip and do the same on the other side.

Once they are finished, you can toss a cup of frozen veggies into the skillet and cook them in the leftover fat. Make sure you divide your meal into two dishes.

It is a simple recipe just as it sounds. Heat and cook the peppers in a skillet, break the eggs in and scramble them together.

First thing in the morning, just take the two pack of chicken legs and put them in a medium-sized pot. Then, you should cover them with water and boil for about an hour. Next, take them out, take the meat off the bones and store it in a fridge. Also, beak the bones in half and put them back in the water and simmer all day on low heat with the lid on.

It is good to know that it won’t be an extremely rich chicken broth, but it will make a nice enough soup broth. After about 3-4 hours, strain it in order to get any bone pieces out, add the chicken back in, about 2-3 cups of whatever vegetables you have left from the frozen veggies, and 1/3 cup of that pizza sauce for a better flavor. Finally, add salt and pepper, and you have enough soup for a couple more meals.

As you can see, by now, you may still have several leftovers, such as pickles, pizza sauce, olives, frozen peppers, sunflower seeds, mayo, and parmesan. So, you can roll these over into a few other products for the following week, and you can purchase a few other things, for instance a little bottle of cooking oil, garlic powder, etc. At least, as you work these menus, you will find that you have more than you can use per week, so that you will have more variety.

Brooke Birmingham: How Small Goals Led to Big Success
Canker Sores In The Mouth: Here Is How To Naturally Get Rid Of Them In A Matter Of Minutes Without Using Any Medicine
To Top