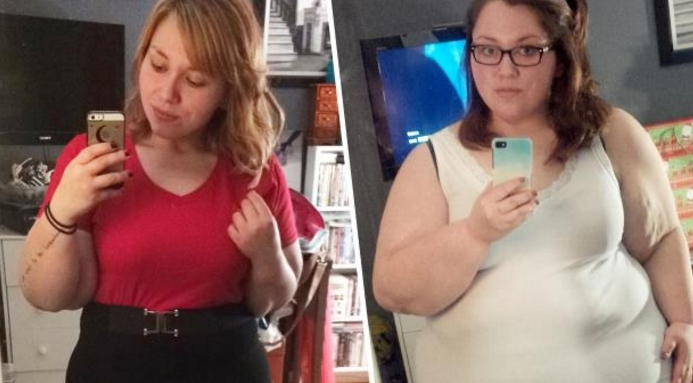 When Diane Naylor, now 40, resigned and moved from Fresno to Oakhurst, California four years ago, she found amazing natural surroundings, where she could enjoy outdoor activities such as climbing, biking, hiking etc.

The only problem was that she weighed more than 400 pounds and didn’t want to be outdoors. In the interview she gave TODAY, she said “I felt miserable and depressed because of my weight. I wasn’t active at all and I couldn’t do all of the things I wanted to.” Although she had had several attempts to lose weight in the past, she always quit before finishing her weight loss plan. But, everything changed when she saw an episode of the TV show “Castle,” which spurred her to give weight loss another try.

“One of the medical examiners was telling the lead actress she should follow her dreams,” Naylor explained. “He pointed to the corpses and said, ‘All those people had dreams, but their time ran out, so don’t let that happen to you.’ It was like a light bulb went off — I had a lot of dreams, too, and I wanted to accomplish them.”

The next day, she didn’t want to lose any more time. Here, she explains what steps she took to drop amazing 225 pounds.

“Don’t put it off,” Naylor warned. “No one gets any younger, and the younger you are, the easier it is. I started at 37, which proves anyone can do it. Why start six months from now? Start today”

What Naylor did was start walking along her driveway. At first she felt rather unbalanced as even walking to her mailbox was a challenge for her. But, she didn’t give up. She lost 20 pounds as a result of walking and a new eating program; she also started using an indoor bike and taking much longer walks around her area. Today, she hikes 4-mile trails and performs 20-30-mile cycle rides with her niece. She doesn’t stop moving until she completes 10,000 steps a day. Naylor pointed out that it’s best to start with short walks and increase your movement as you get stronger.

After dropping 50 pounds, Naylor joined the Taking Off Pounds Sensibly club, otherwise known as TOPS. The club gives accountability and constant assistance in its members’ weight loss struggles. Naylor attends meetings every Monday; she received calls, email messages and letters of encouragement from several other members when she first started.

“The Monday meetings help me keep myself in check during the weekends, when I’d be most likely to cheat,” Naylor said. “If you don’t have access to a similar group — start one yourself! Find similar-minded people who will understand and support you.”

“I learned how exactly to eat seafood. I didn’t look after it before, but I picked up an air fryer which helped me make it without the grease and I in fact just like the way it tastes,” Naylor said.

Naylor has tried several different weight loss programs before she found TOPS including Pounds Watchers and Jenny Craig; however, she constantly re-gained her weight.
What was different this time was that instead of seeing her lifestyle changes as a “diet,” she simply approached it as small changes for a healthier and longer life. She increased her vegetable intake and cut down on fast food.

“I determined what worked for me personally,” she said.

With This Home Remedy You Can Say Goodbye to Abdominal Fat in Just 2 Weeks!
RESPECT YOUR PARENTS IN THEIR OLD AGE – HEART TOUCHING STORY
To Top