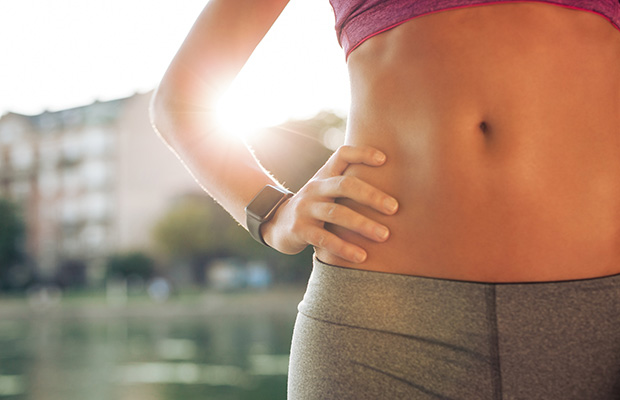 You’ve tried them all in your pursuit of flat abs: crunches, reverse crunches, planks, bicycles and even the ab roller. After all, it seems logical. To increase muscular definition and lose fat, you should work your stomach muscles more. But will that really lead to a trim belly? “You can do 50,000 crunches a day, but it will still only be toned muscles under your belly fat,” says Lauren Harris-Pincus, MS, RDN and owner of Nutrition Starring You. “The truth is, unless the weight comes off, you’re not going to get a six-pack.” So how do you get rid of the stubborn cushion around your midsection? Read on to get the real scoop on how to lose your pooch.

First things first, everyone has fat, both the layer of subcutaneous fat just under our skin that helps insulate the body and the deeper visceral fat that surrounds and protects your organs. That’s right: You’re supposed to have belly fat. But just how much fat you have and how it’s distributed has more to do with genetics than your core workout. Men and women squirrel away fat differently, according to Harris-Pincus. On average, women have six to 11 percent more body fat than men, typically gathered around the thighs and hips and giving rise to a pear-shape (especially before they hit menopause). Men, on the other hand, tend to accumulate fat around the belly (hence, the beer gut). Thanks to the hormone estrogen, the female body likes to hold on to fat, too. A study in Obesity Reviews shows that women store fat more efficiently than men in an effort to prepare the body for pregnancy. But while it seems like women may have drawn the short-end of the stick, the stereotypical pear-shape is actually considered healthier than boasting a beer gut, because belly fat is a red flag when it comes to your health. “Visceral fat is associated with increased risk of diabetes, high blood pressure and metabolic syndrome,” says Harris-Pincus.

How to Lose Belly Fat

Doing ab workouts might strengthen your core, but it won’t actually zap fat — and that’s why you need to eat healthy. “You exercise for 30 minutes compared to the 23-and-a-half hours that you don’t exercise. You need to eat the right things,” says Harris-Pincus. Repeat after us: It’s time to start eating clean. She recommends a combination of veggies, fruit, whole grains, nuts, seeds, beans, low-fat dairy and lean protein like poultry, eggs and fish for a dose of omega-3 fatty acids. And  nix the added sugar while you’re at it. “Studies show that when you have a diet rich in whole grains — and calorie-controlled — that you can trim the belly fat,” she says. But remember to watch your portions, too. “A lot of people eat very healthy and don’t eat junk, but their portions are too large.” If you’re smart about the foods you choose and limiting your intake, eventually you’ll start losing body fat all over. But sorry: There’s no way to get it to disappear from only your belly — you may lose fat your face, hips, butt and chest, too.

There isn’t one magic trick or quick fix that will melt the fat around your midsection and give you those coveted abs we all see on the newsstands. It’s about making changes over the long-term. Source: dailyburn

Raising Children Near Their Grandparents Is The Greatest Gift You Could Ever Give Them
Do You Have High Blood Pressure Or Heart Problems Avoid These 14 Foods At All Costs!
To Top