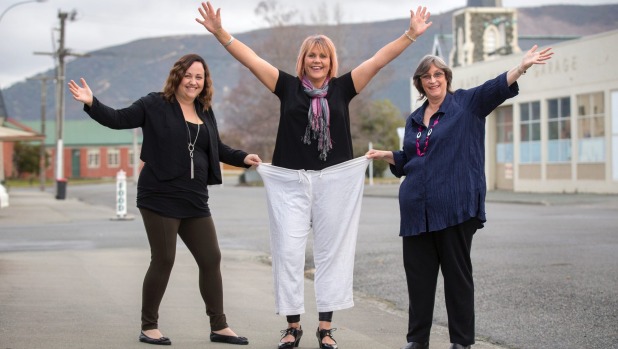 Since it was taken, more than a year has passed and more than 30 kilograms have been lost. She weighed 126.5kg in the photo. Anderson is one of about 45 people who lost a collective 700kg during the first year of the Waimate Weight Watchers.

She decided she needed a change when she could not get off the floor without using nearby furniture to help her stand up.

“When I first started, I walked around the cul-de-sac and then hobbled for the next week,” Anderson said. “I was too heavy to be walking.”

But she worked on losing a kilogram, then progressed from there and now she can “walk as far as I want”. Her sugar tolerance was “way too high” and it was not until she cut her intake that she realised how sweet apples, which had tasted bland before, were. Anderson saves about $20 a week on groceries, which is about $1040 a year: “I’m buying different things and less food.” Her goal weight is 66kg, which a healthy average weight for her height. Weight Watchers facilitation coach Debby McNamara had been “severely overweight”, weighing in at 122kg at her heaviest. “Then a number of years ago, I had a heart attack,” McNamara said. It was then she decided to get her life back on track: “I’ve lost 51kg.” McNamara, who plays hockey and squash, decided to set up the local group with a friend Tania Hargreaves to help others lose weight. She decided to set a 500kg collective loss target by their first anniversary and the group of about 45 “on and off” members surpassed it. Last week, they had lost 699.9kg: “This week we’ll be well and truly over [700kg].” It was never too late to lose weight and get healthy, which she had felt when she first started trying to cut the kilos. Waimate was “such an awesome place … so supportive” and she encouraged men and women to take charge of their health.