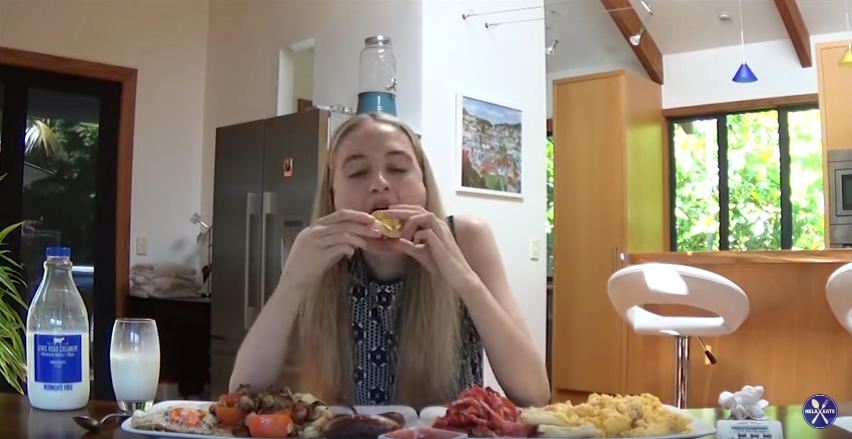 Do you ever find that eating breakfast – even a “solid” breakfast like steak and eggs – makes you hungry?

You start your day off right, re-fueling after sleep, then sometime around 30 minutes to 2 hours or so later you’re hungry again, as though you never even ate. It’s not all in your head, and you’re not alone.

Many experience a similar reaction to breakfast, and in the featured article nutritional consultant and personal trainer Martin Berkhan may have the answer to why post-breakfast hunger occurs, and what will get you on the right eating track.

This might sound surprising at first, but it actually begins with omitting breakfast altogether.

The interesting aspect about eating first thing in the morning is that it coincides with your circadian cortisol peak, that is, the time of day when your cortisol (stress hormone) levels rise and reach their peak.

The circadian cortisol peak has an impact on your insulin secretion, such that when you eat during this time it leads to a rapid and large insulin release, and a corresponding rapid drop in blood sugar levels, more so than when you eat at other times of the day. If you’re healthy, your blood sugar levels won’t drop to a dangerously low level (such as can occur with hypoglycemia) but they can drop low enough to make you feel hungry.

“In the “glucostatic theory”, Jean Mayer in the 1950’s proposed that low blood sugar served as the primary hunger-triggering signal that prompted us to feed. Later studies have taught us that appetite regulation is way more complicated than that, but there is clearly a role for blood glucose in this equation.

This is more commonly experienced in people who are not insulin resistant (such as those who are overweight or have type 2 diabetes), but rather are lean and “insulin sensitive.” Because the circadian cortisol peak adds another insulin-boosting effect on top of an already insulin-sensitive individual, the low blood sugar, and subsequent hunger, can be more pronounced.

Although this idea goes against the conventional idea of making sure to never skip meals, especially breakfast; Berkhan says that once he ditched breakfast he found it was much easier to control food cravings and hunger throughout the day.

Why I Stopped Eating Breakfast

I have revised my personal eating schedule to eliminate breakfast and restrict the time I eat food to a period of about six to seven hours, which is typically from noon to 6 or 7 pm. Our ancestors rarely had access to food 24/7 like we do today, and it makes sense that our genes are optimized for intermittent fasting.

On the days that I exercise in the morning, I will have two scoops of Pure Power Protein about 30 minutes after the workout to provide nutrients, especially leucine, for muscle growth and repair.

Interestingly, since adopting this approach for the past few months I have lost two inches from my waist size and gained three pounds, which means I have lost body fat and gained muscle mass. This has been a personal experiment of mine to see if I can get back to my high school waist size of 32 inches, even though I weighed 20 pounds less back then. A growing body of intriguing research is, in fact, showing that intermittent fasting may be a key weight loss tool.

The Link Between Intermittent Fasting and Weight Loss, Health Benefits

When researchers from the Salk Institute fed mice the same high-fat, high-calorie diet but altered when they were able to eat, some striking results occurred. One group had access to food both day and night, while the other group had access to food for only eight hours at night (the most active period for mice). In human terms, this would mean eating only for 8 hours during the day.

Despite consuming the same number of calories, mice that had access to food for only eight hours stayed lean and did not develop health problems like high blood sugar or chronic inflammation.1 They even had improved endurance motor coordination on the exercise wheel. The all-day access group, on the other hand, became obese and were plagued with health problems including:

Another recent animal study published in the International Journal of Endocrinology showed a beneficial glycemic effect from fasting that resulted in a lower gain in body weight than in non-fasting animals.2 Other research suggests fasting triggers a variety of health-promoting hormonal and metabolic changes similar to those that occur when you exercise.

Fasting is historically commonplace as it has been a part of spiritual practice for millennia. Modern research has also confirmed there are many good reasons to fast intermittently, including:

There’s also plenty of research showing that fasting has a beneficial impact on longevity in animals. There are a number of mechanisms contributing to this effect. Normalizing insulin sensitivity is a major one, but fasting also inhibits the mTOR pathway, which plays an important part in driving the aging process. Fasting has even been linked to a dramatic rise in human growth hormone (HGH)—1,300 percent in women, and an astounding 2,000 percent in men!3

HGH, commonly referred to as “the fitness hormone,” plays an important role in maintaining health, fitness and longevity, including promotion of muscle growth, and boosting fat loss by revving up your metabolism. The fact that fasting improves a number of potent disease markers also contributes to fasting’s overall beneficial effects on general health.

Exercising while in a fasted state has also been shown to produce many beneficial changes, and it works particularly well to exercise first thing in the morning and delay your first meal until later in the day. To learn more about this strategy, please see this previous article by fitness expert Ori Hofmekler.

Is Skipping Breakfast Right for You?

There’s no cut and dry answer to this question, as everyone responds differently to intermittent fasting.

For example, there is good evidence supporting the recommendation to eat a protein-heavy breakfast if you want to lose weight, and even more so if you exercise first thing in the morning to optimize muscle growth and recovery. But there may be times when you feel like you’ve hit a plateau, and while your diet and exercise routine may be good, the simple act of skipping breakfast and exercising on an empty stomach could be just the thing that will kick start you onto that next level.

Certain health conditions should make you think twice about fasting, including if you’re hypoglycemic or diabetic. Hypoglycemia is a condition characterized by an abnormally low level of blood sugar. Ideally, you should avoid fasting if you’re hypoglycemic, and work on your overall diet to normalize your blood sugar levelsfirst. Then try out one of the less rigid versions of fasting before even considering a full 24-hour fast.

As for pregnant and/or lactating women, I don’t believe fasting would be a wise choice. Your baby needs plenty of nutrients, during and after birth, and there’s no research supporting fasting during this important time. There are several studies on fasting during pregnancy, and all suggest it might be contraindicated, as it can alter fetal breathing patterns, heartbeat, and increase gestational diabetes. It may even induce premature labor.

If you’re healthy and you do decide to give intermittent fasting a try, do so gradually (don’t try to do a 24-hour fast on your first day). Ultimately, you can opt for a 16-, 20-, or 24-hour fast once or twice a week, or try fasting every other day, or simply delaying certain meals, such as skipping breakfast and exercising on an empty stomach.

There are many options, and you can discover what works best for you by listening to your body, and going slow; work your way up to longer fasts if your normal schedule has included multiple meals a day. You can also start out by ending your meals earlier in the evening or late afternoon and fasting overnight while you sleep.

Your body will let you know whether you’ve found the right combination of intermittent fasting for you, as you should experience a boost in energy and likely weight loss, if necessary, once you get started. If you feel weak, lightheaded, very hungry or fatigued while fasting, these are signs that you may be fasting for too long and it’s time to tweak your program.

This is Why You Have Bloated Stomach and How to Get Rid of Bloating and Lose Weight Overnight!
HOW MANY CALORIES SHOULD YOU EAT PER DAY ?
To Top